>Man, it’s been AGES since I blogged! Things have been kind of busy around here since I had Oscar.

So, let’s see… um, Oscar is growing very well, and is doing wonderful. He’s a great eater and sleeper and has such a laid back, chill personality; very much like Jeff!

Something we did with the girls was stick a giraffe on their heads on their first Independence Day. Obviously, we had to do this with Oscar too! 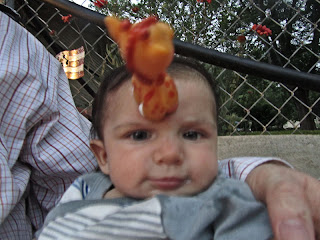 He looks rather bemused actually. As opposed to Zoe’s ANGRY face: 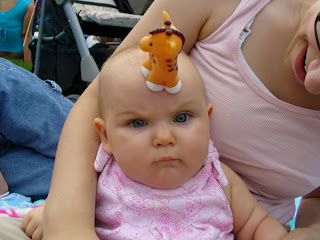 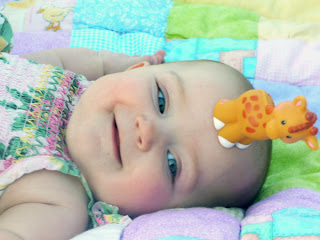 Being a mom to three kids is honestly MUCH easier for me than having two kids. I’m not entirely sure how or why; and that will probably change once Zoe starts Kindergarten; because then for a few hours of the day for 5 days a week, I’ll just have two kids at home. It’s going to be hard on Ruthie I think more than anyone else since Zoe’s been a constant in her life since the day she was born, and while he’s cute and fun, Oscar doesn’t do much. I’ve been feeling content with the number of kids I have, and I KNOW for certainty my family is now complete; everyone that’s supposed to be here are here.

Oddly enough, cloth diapering is going much easier than I had anticipated. There’s been a few hiccups along the way, but I’m seriously thinking to myself; “This is way easy and so much better than having to worry about disposable diapers!

I’m getting closer and closer to my driver’s license! I’ve done 3 observations with the driving school and one driving time; I have two more scheduled for next week. And after discussion and weighing the pros and cons we’ve decided that I will take the driving test with a private company versus going to the DLD/DMV. I’m hoping this will all be done by August 1st; however I’m not entirely sure if that will happen. At the very latest, I need to have it by August 10th; that’s the day that kindergarten registration is. That’s in three weeks; I KNOW I can do it!

Once life catches up I’ll be able to blog more.